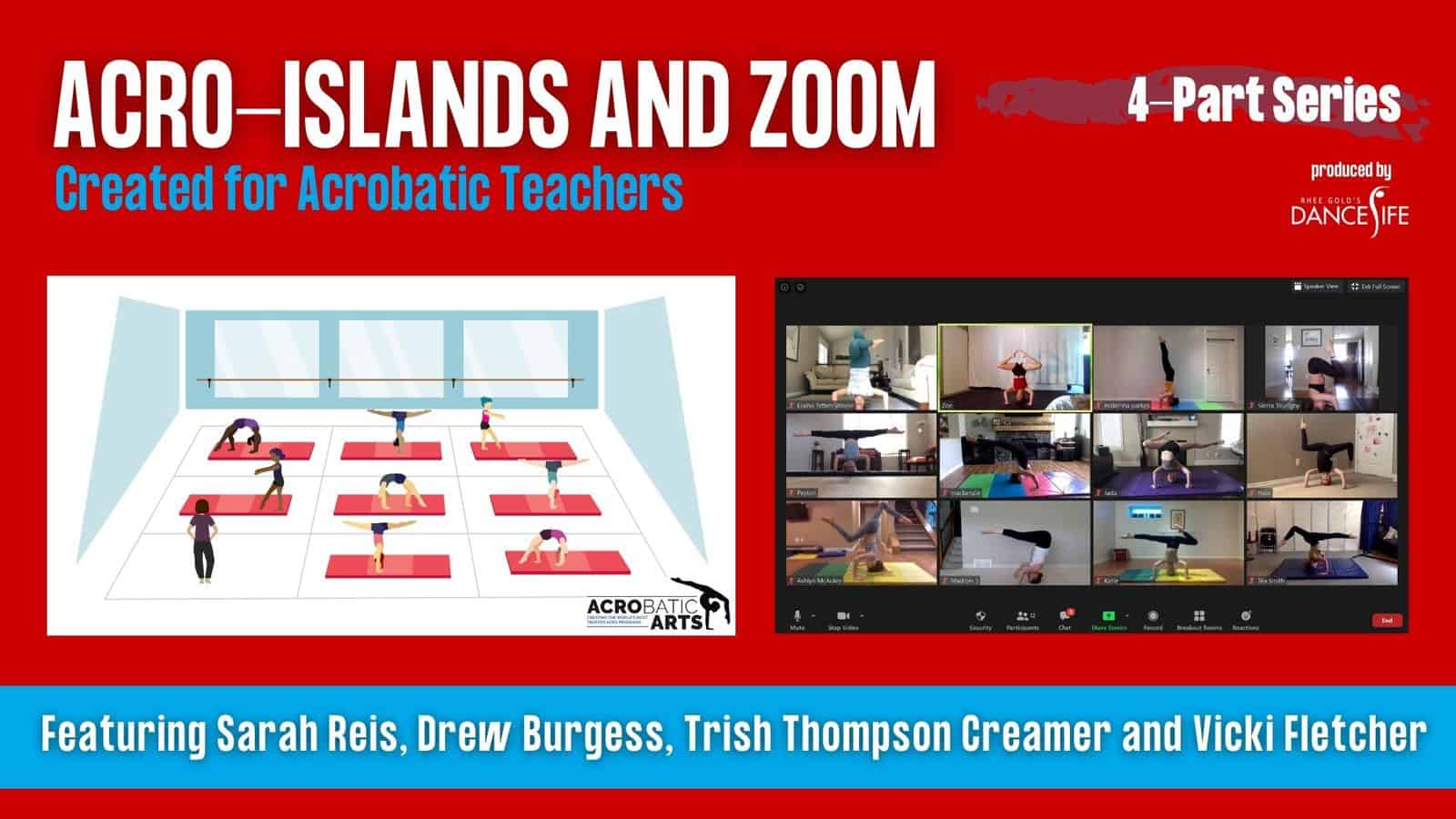 Is it possible to teach AcroDance while your students are on their own mat, without physical spotting from the teacher? How about on Zoom? Can dancers really find progression and advance without being in the studio with the teacher?

YES! It is possible! You can have engaging, effective classes even when you can’t spot your dancers. Plus, there’s an added bonus: Learning how to teach without spotting will make you a much better teacher, with more organized classrooms, more engaged students and exciting results! This means that when spotting tricks is once again possible, you will have the advantage of using spotting as well as the skills you learn during the pandemic to progress your students. In short, you will be a more effective teacher!

This series will focus on ways teachers can keep dancers engaged and progressing in AcroDance classes while teaching without spotting skills. Learn tips and tricks for every part of your Acro classes, from classroom management to progressions using trick ladders, drills and games and so much more! The lessons you take from instructing during the pandemic will enrich your teaching long after zoom is no longer the norm! Expert teachers from Acrobatic Arts will give you teaching tools you can use in your next lesson, and for a lifetime!

This class will introduce a variety of games and challenges teachers can play with students to make Zoom instruction fun and engaging while also productive. A list of games will be introduced and ideas on how to integrate them and modify for age/level will be discussed. Not just for Acro Class, the ideas outlined in this class will be useful in all genres.

This session will cover the rudiments of limbering safely and efficiently. We will focus on training the spine to separate and lengthen while maintaining strength and stability throughout the entire body. Attendees can expect to see drills, progressions, and variations of kneeling and standing bridges, arabians, limbers, and walkovers. All progressions will be demonstrated without the need for spotting.

Keep your advanced students progressing, while keeping them safe, by introducing variations to skills they have already mastered. Cartwheels, walkovers, balances and more can be used as the base for spectacular tricks that will leave the audience wondering ‘how did they do that!!’ This class will give you many ideas for training new variations that your students will love from master Acro teacher Trish Thompson Creamer!

This class will focus on balancing and tumbling for all ages and levels. We will look at different entrances and exits for balances to keep dancers progressing and challenged. Drills for tumbling will centre around body shaping and positioning to build strong confident tumblers. Truly understanding body shaping will help dancers achieve tumbling tricks faster once we get back into the studio and spotting is possible!

Includes resources as well as handouts for each lesson!

Sarah Reis, MEd, BKin, BEd
In her early development Sarah split her time between gymnastics and dance then later got into circus work and competitive rock climbing. The combination of these skills led her to a performance career as a stunt double in the thriving Vancouver film scene. While enjoying a professional performance career she worked on various projects including cruiseship contracts, print, television, film and nightlife productions. Sarah has always felt it was important to continue her education and graduated with a Bachelor’s degree in Kinesiology in 2006. After graduation Sarah started work as an artistic sport rehabilitation specialist in a Physiotherapy clinic during the day while teaching dance in the evening. At the clinic Sarah primarily designed return to training programs for injured artistic athletes.

Sarah is a certified teacher in acrobatics through the Canadian Dance Teachers Association (CDTA) and is a level three coach in women’s artistic gymnastics with the National Coaching Certification Program (NCCP). Sarah holds longstanding certificates with many established dance teacher, Pilates and fitness related organizations. Sarah eventually returned to school to study contemporary dance at Simon Fraser University and completed a second degree in Education. Sarah spent some time working in the school district, holding an official teaching license with the BC ministry of Education in the specialty of performing arts and physical education. In 2008 she completed her Master’s degree in Human Performance Coaching Sciences from the University of Victoria where she researched in the field of athletic motor development and later developed the curriculum for the International Dance Teaching Standards teacher education program for developing dance educators.  Sarah began her doctorate research in Leadership Education but has since switched her focus to Dance Medicine. Within her research Sarah is interested in AcroDance teaching methodology and recently presented at the International Association of Dance Medicine and Science.

When not touring as a public speaker, Sarah is the director of a large dance competition and manages a physiotherapy clinic among other small businesses. Sarah has spent the last decade touring worldwide presenting at various universities, dance conventions and conferences and can also be seen live from Los Angeles with CLI Studios. With a strong creative pull Sarah has been choreographing AcroDance lines and productions for more than twenty years and continues to be passionate about student development when she is home and able to teach in her hometown. Module three certified, Sarah is an examiner and course conductor here at Acrobatic Arts.

Drew Burgess
Ohio native, Drew made his industry debut on Live with Regis during Amazing Kids Week. Upon relocating to California, he
trained at L.A.’s best studios including EDGE, Millennium, Fusion, and the PAC Annex. Drew is highly sought after as a performer, choreographer, guest teacher, dance supervisor, & dance captain. Drew can be seen on teaching & adjudication panels for: Chicago National Association of Dance Masters, Dance Teachers Club of Boston, Headliners, DanZa, 10+ Dance Masters of America Regional Chapters, Dance Educators of America, & the Rhee Gold Company. A former competitor himself, Drew’s regional titles include Master, Junior, and Teen Mr. Dance of Ohio, as well as, Mr. Dance of the Pacific Coast. Nationally, Drew is a former Jr. Mr. Dance of America and Mr. Dance of America. Drew is certified by test to teach through DMA & DEA in Ballet, Tap, Jazz, & Acrobatics and is an active member in both organizations. Drew is also proud to be Acrobatic Arts Certified (M1-M3) & part of their U.S. Division Staff of Course Conductors & Examiners.

Drew’s passion for dance circles the globe with guest workshop classes, technique clinics, & choreography, year-round. His corporate & live entertainment credits include performances with the Radio City Rockettes, Taylor Swift, & The Baha Men. Drew’s students have accolades including: Teen Miss Dance of Arizona, Male Dancer of the Year, Miss Dance of Ohio, & Mr. Dance of America. His National Choreography merits include the Sherry Gold Memorial Choreography Award from DMA & Best Small Group & Production from NexStar. Drew has toured worldwide with Rasta Thomas' Bad Boys of Dance as a Swing in Rock the Ballet 2 and Romeo & Juliet. He was honored to serve as the Tap Director for four years at Spisak Dance Academy in Glendale, Arizona; and now resides in Columbus, Ohio and is part of of the teaching staff at Straub Dance Center.

Vicki Fletcher
Vicki Fletcher was born and currently lives in Ontario Canada and has been dancing since the age of 2. She soon realized that her love for all forms of dance was something she wanted to share with others through teaching. She began teaching at the age of 17 and has been doing it ever since. Vicki brings 25 years of teaching experience in jazz,tap,acro,lyrical, stretch and conditioning and musical theatre. Vicki graduated from Dance Masters of America's Teacher's Training School at Kent State University and the University of New York in Buffalo and is also certified through the Ontario's Gymnastics Federation.

Vicki has adjudicated dance competitions and has taught workshops at many studios in Canada. She feels it is very important to stay current with your training so attends workshops and conventions  whenever she can. She has won many awards for her creative and innovative choreography and her students have won numerous awards,scholarships and titles. Many have gone on to pursue their own careers in dance whether it be performing in companies or on cruise ships, studying dance in University and becoming teachers themselves.Through her years of teaching Vicki has become more and more passionate  towards the acro aspect of dance and has had great success in building a strong acro studio. This love for acro and the desire to see it done safely by teachers and students is what makes being a part of Acrobatic Arts so exciting for her.

She is looking forward to working with students and teachers from all over the world who share her passion for acro.

Trish Thompson-Creamer
Trish Thompson-Creamer started her training in competitive artistic gymnastics. After much practice and years of hard work, Trish became well-established in the gymnastics community as a coach and judge for the Ontario Gymnastics Federation.  During this time, Trish also explored the world of dance which soon became her true passion.  She eventually chose to stay in the dance world, building a reputation as a talented and creative teacher/choreographer with her forte being acrobatics.

In 1992 Trish opened the doors to Rythum Plus Dance Company which is now celebrating 25 years in Stoney Creek, Ontario.  Since that time, Trish has become a nationally-renowned teacher, choreographer and adjudicator, achieving much recognition and acclaim in the dance community.  Trish is a member of Dance Masters of America Chapter #38 where she is a certified acrobatics examiner and is currently the president of the chapter.  Most recently, Trish has also become a member of the Acrobatic Arts faculty where she is involved in the discussion of the syllabus, running modules, and travelling across North America to teach acrobatic workshops.