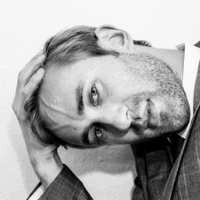 Brett Perry is a multi-dimensional artist who believes deeply in the transcendent power of the arts. Born and raised in Indianapolis, Brett discovered dance at the age of 4 via The Dance Co. under the direction of Diane Gudat. A graduate of The Juilliard School, Brett has performed works by acclaimed choreographers such as Aszure Barton, Lar Lubovitch, Ohad Naharin, Cystal Pite, Robert Battle, Medhi Walerski, Eliot Feld, Jose Limon and Sharon Eyal.

After graduating from Juilliard, Brett moved to Boise, Idaho to begin his professional career as a founding member with the highly celebrated Trey McIntyre Project. During his 6 years with TMP, he toured to 40 states and18 countries, represented the City of Boise, and the United States, as a U.S. Cultural Ambassador. He spent the 15/16 season with Ballet BC in Vancouver, British Columbia under the direction of Emily Molnar. Brett is currently a freelance dancer working with Aszure Barton & Artists, LED, Ballet Idaho and Adam Weinert.

Brett is a sought after teacher, educator and coach having taught master classes and seminars for institutions such as Point Park University, Western Michigan University, The Hartt School, Jose Limon Dance Company, Boston Dance Theater and Ballet Idaho. He regularly assists Lar Lubovitch and Aszure Barton as a repetiteur in staging their works for companies and school across the nation. Perry was a 2010 recipient of the prestigious Princess Grace Award for Dance and is the inaugural Alexa Rose Foundation Fellow in 2020. He was the 2003 American Dance Awards Male Dancer of the Year and served as a Pride Foundation Ambassador in 2011.

When Brett is not in the studio or on stage you can find him working in the gardens and cultivating the land at Meadowlark Farm in Nampa, Idaho. Brett met farmer, food activist and now mentor Janie Burns, during a TMP photoshoot at Meadowlark back in 2009 where his curiosity of farming sparked. Now, along with continuing to master the art of dance, farming is a major creative outlet and will continue to shape his life for many years to come.