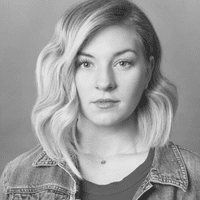 Courtney Thurston graduated from Pace University with a BFA in Commercial Dance and Pedagogy. Her recent works include body doubling Julianne Hough for an endometriosis commercial choreographed by Marinda Davis. She can also be found on the big screen, where she can be seen dancing in the movie “In the Heights!” Courtney has toured with JUMP dance convention and directed their Jumpstart program. Courtney was also featured on the hit TV show “So You Think You Can Dance” season 10.

Since graduating, she has developed an interest in psychology. She is certified in positive psychology and mindful meditation coaching. Courtney grew up in Clifton, VA just outside of Washington, DC. She has trained at schools such as The Rock School, The Joffrey Ballet, ABT, The Washington Ballet, and Broadway Dance Center. Some of her childhood works include: Debbie Allen’s production of “Alex in Wonderland” and ABT’s Christmas special “The Nutcracker”. Courtney shares her passion for dance by traveling the country choreographing, teaching, and performing. A fun fact about Courtney is that she held the world record for consecutive back handsprings from 2013-2016.