And other reasons not to panic about your recital.

In my years as a teacher and studio owner, I have produced more than 27 year-end recitals and at least 16 full-length story ballets. If I have learned anything about the production part of the dance business, it is that it requires two important attributes: the ability to compromise and the ability to enjoy the humor in the things that can—and always will—go wrong.

My concept of a recital, I have found, differs from that of some of my peers. This is probably due to the limited resources and staff at my disposal. There is a lack of reasonably priced theaters in my area, minimal equipment in the high school theater I rent, and funds to rectify these situations are nonexistent. But I have learned to make the most out of what we do have. With dads operating the spotlights and a high school gym teacher commanding the light board, we have produced some amazing results.

Anyone who produces recitals must experience their share of mishaps, and I’ve got a few favorites. For our production of Cinderella, the curtain was a “riser” rather than a draw-type. At the top of the show, the curtain-puller yanked the wrong cord; instead of raising the curtain, he brought it down into a pile at the dancers’ feet, giving the audience a waist-up view of the dancers. Frantically, he pulled it back up, where it promptly caught on the front border, this time revealing the dancers from the knees down. After the curtain made several more trips up and down, displaying various portions of the dancers each time, I finally ran out and pulled it toward me to free it of obstacles. As the curtain finally rose, I was left standing center stage, whereupon I smiled, bowed, and ran offstage.

Less than 45 minutes later, disaster struck when a car hit a utility pole outside the theater, knocking out the power. Naturally, the emergency generator failed to come to the rescue, leaving my dancers in the pitch black. With the outdoor temperature close to 20 degrees below zero, I knew the theater would soon become uncomfortably cold. I could hear the muffled screams of the older dancers in dressing rooms two floors below and hundreds of small children in the dressing rooms across the hall. The sheriff’s department arrived to evacuate the theater, bringing the students out to the headlight illuminated lobby to join their relieved parents. A few weeks later, we tried again. This time, Cinderella’s tutu was missing. I found it outside, hanging in a tree, blown there by the winter wind.

I thought my jinxed Cinderella was a recital disaster award winner until another teacher told me that during her recital a tornado blew the top off the auditorium and, in a matter of seconds, dumped several feet of water on the audience and performers. Though stunned, no one was injured. She wins.

Another personal favorite of mine is the stalled sled in our Nutcracker. It was rigged to be pulled by a cord from the opposite side of the stage so that it would appear to float magically behind the Snow Queen. When it failed to roll on its own, I had to climb beneath it and drag it, like a Marine, across the stage.

Then there was the dress rehearsal when someone leaned up against a backstage light switch, flipping off the power to the control booth. All of the lights onstage, including the work lights, went out. It took three hours and two electricians to figure out what had happened and flip the switch back on.

Another year, when the recital costumes did not arrive as promised, I spent all night at Wal-Mart trying to outfit five classes of students. I showed up exhausted the next day, pseudo-costumes in hand, only to discover that the light crew for the performance was not the one that had come to the dress rehearsal, making the previous day’s setting of cues a total waste of time—not to mention the technical end of the show a bit shaky.

We’ve all had the student who becomes ill onstage or should have visited the bathroom; the preschool crier; the missed entrances; the bossy 3-year-old who tells the other kids onstage what to do; the costumes that stuck together; the wrong or worn-backwards costume; the evacuations due to a misled fire alarm. Then there are the broken straps, lost headpieces or props, the hat hanging from a single bobby pin, the falling hair, the shoe flying through the air, the frozen preschooler, and the one who won’t quit waving. I have also watched, with horror, as a little boy feasted on fallen sequins during his performance and a little girl removed the top of her costume because the straps were too tight.

What have I learned from these moments of panic and frustration? That the recital belongs to the children. They are the stars, and what’s important is how they will remember their experience. Will they remember how much their costume cost or if they did their dance perfectly? No—but they will remember that Mom took pictures, that Grandma came, and that they felt very special.

Producing a recital is like throwing a wedding with several hundred little brides (and their mothers!). You can’t please everyone. Something will always go wrong, and performances are never perfect. I know that presenting a professional, flawless recital would make me look good, but my clients are probably more impressed by the fact that I handle difficult situations with a smile and keep my cool. And their word of mouth is the best advertisement I could hope for.

So this year, when the auditorium director called me the morning of dress rehearsal to tell me that all the seats would be removed that day to begin renovations, I took a deep breath and kept both my cool and my sense of humor. It all turned out fine, and I believe it always will. 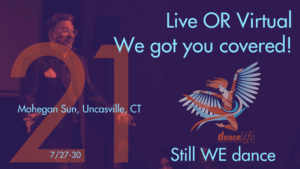